Theoretical and/or Cultural Context  &  Ideas Addressed by the Play Text.
Rhinoceros, a "quasi-allegorical play" written in 1959 by Eugène Ionesco, is a leading post-war French drama piece in the Theatre of the Absurd. (Kuiper) The term Theatre of the Absurd was first officially introduced in the book The Theatre of the Absurd by Martin Esslin in 1961. The Theater of the Absurd is a theatrical movement that begins in the 1940s, emphasizing the absurdity of humans struggling to find meaning in lives because they always seem to end up in the same place. Its philosophy ties into Albert Calmus' Absurdism of lives devoid of inherent meaning and full of randomness and absurdity. Absurdist plays tend to remind our isolation in the world despite the existence of social structures and connections. The Theater of the Absurd also mainly contains existentialist thinking with "Soren Kierkegaard's dictum that 'existence precedes essence'" which complements absurdist thinking and endows motivations to the characters finding their meanings themselves. (Sparknotes) The Theater of the Absurd "rebelled against theatrical traditions," and expressed frustrations to the meaningless and bizarre situations that human faces and the despair of changing or improving the surroundings. (Haskell and Kissel) In Ionesco's Rhinoceros, the protagonist Berenger finds himself in an isolated, absurd situation in which everyone is turning into surreal rhinoceros. He struggles to find meaning for himself and fails to impact others' transformation to absurdity.

These frustrations are rooted in the post-WWII context of the play. The Romanian-French playwright Ionesco classified Rhinoceros as an anti-Nazi play, and the play was put out at a time when tensions from WWII has settled down relatively. However, the fear of fascism still lingered in societies. The play even had "reported fifty curtain falls in Germany'' in its first performance. (Sparknotes) Ionesco lived back and forth between Romania and France. He was disgusted by Romania's conservatism and anti-Semitism and observed two world wars making destructions that made human civilizations seem fragile, irrational, and absurd. In Rhinoceros, everyone except Berenger embraces collectivism even when rhinoceros are violent, irrational, and lack individuality and independent thinking. Ionesco's commented on how Nazism attracts people with deceptive senses of majority, community, trusts in authorities, and higher purposes with natural impulses that lack morality or empathy. The green skins of the rhinoceros satirized the Ordnungspolizei's symbolic color when Germany occupied part of France. These ideas align with the anti fascism cultural movement carried out among the world after WWII. He implies racial, colonial, gender, and queer oppression in issues of relationships between rhinoceros and humans, the origin of rhinoceros, Daisy and Berenger's love, and personal choices of whether to be rhinoceros. (Horn) These can be seen in various uprising post-war social and cultural movements as well. The discussion of solving cultural crises and innovations of the connections with the audience make the play to be involved in the avant-garde theatre (Experimental Theatre) movement in the late 19th century.

However, this does not mean he fully supported communist narratives or believed in logic and reasons. In one interview, Ionesco stated, "it was an error to think that my plays were only an attack on la bourgeoisie and consequently that my thinking was revolutionary and Marxist!" (Jacquart and Ionesco 3) After WWII, the second Red Scare, the fears of the spread of communism and anarchism, uprose in the 1950s as the Cold War started. In Rhinoceros, the radical leftist intellectual is embodied by Botard, who is sensitive about racial differences of the rhinoceros, opposes any form of religion, and uses the union to fight against exploiters like Mr. Papillion. Botard continually ignored the evidence against him and ironically joined the rhinoceros because he "must move with the times." (Ionesco 89) This is a direct parallel to criticize the French intellectual Jean-Paul Sartre. Ionesco said, "Dudard is Sartre" for ignoring or justifying gulags and the Great Purge even when the evidence is undeniable. ("Rhinoceroses") The logician in Rhinoceros seems rational, yet he made many false statements, such as a dog is a cat because they both have four paws, and he ended up being a rhinoceros. Through this character, Ionesco added another layer of absurdity and reflected the inefficiency and fallacies in logic that can be misleading and corrupted.

When I read the play, what grabbed my attention the most was the impression of rhinoceros getting closer and closer with more and more alliance. The threats of the rhinoceros intensify throughout the play. I feel more and more alone and frustrated under this atmosphere because through Berenger's eyes, I see how everyone is turning against him and choosing a path that he can not understand or empathize with. Everything is totally ridiculous, and yet people ignore or get used to it. I struggle internally with the characters trying to decide whether to fight against the status quo of people turning into rhinoceros for humanity and individual consciousness, or join the rhinoceros, have companions, and be freed from restrictions to exercise the public's will. This struggle and people's views towards the rhinoceros are concretized on the stage. Specifically, I think the transition of rhinoceros' sounds from being noisy and divergent to merging into one harmonious and collective melody might demonstrate these thought processes. These exhibitions are presumably crucial to reflect and set off the protagonist Berenger's internal feelings. I've considered that the rhinoceros roars might be orchestrated throughout the play to make the roars converse slowly from noises to almost a symphony.

The physical appearances of the rhinoceros are also essential to have this transformation in the end. There are several possible ways I thought about in the presentations of the rhinoceros herd.
1. The rhinoceros herd could just not change at all. That will possibly be more ironic because the changes that these characters see won't be real. Therefore, a statement is made that it was the perceptions people choose to observe under pressure from others in the environment that makes the rhinoceros seem more beautiful and appealing.
2. The rhinoceros might be projected on the screens or walls with animations so that we see an artistic demonstration that the rhinoceros slowly change from ugly to beautiful. This plan might fit into the overall atmosphere and add more absurdity to the scenes.
3. The actors might change their makeup or headgear of the rhinoceros constantly to show the changes. This might be very hard to do for the herd of rhinoceros because the audience always observes the performers when they are on stage.

So here are some rhinoceros costumes/props that I initially pictured. 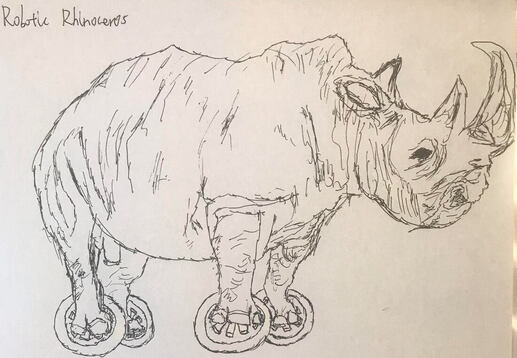 On the left is the first rhinoceros that "ran" across my head while I was picturing the rhinoceros on the stage that hit the cat. I initially considered a fully simulated one with hooves instead of wheels, just like the robotic dinosaurs I saw in museums. But I added wheels eventually because the rhinoceros will be actually dangerous under the speed required in the script without them. The robotic rhinoceros with wheels will be easier to control, safer, and less costly. The audience won't see the wheels anyways because of smoke, and the running sound can be a sound effect.
Another large rhinoceros piece I imagined is very similar to lion dance costumes. Two people control the running rhinoceros. These rhinoceros might be more vivid and feasible. 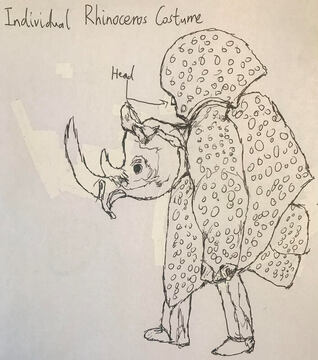 ​
​The sketch on the left is one design I like for the rhinoceros heads at the window. (Man dressed) People can easily see and run in this costume. This design can be suitable for the physical herds of rhinoceros because it doesn't take a lot of space and can each be carried by one person. Also, this version not only emphasizes rhinoceros' heads but also covers almost the whole body.

I brainstormed a few of the stage designs too. 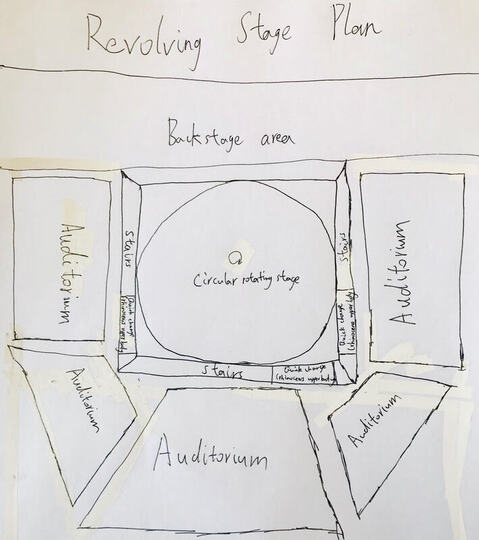 ​Shown on the left is a revolving stage plan. In this plan, the stage is a thrust stage so that the audience can observe the performance on three sides. When performers go off the stage in a scene, they can go to the quick changing/waiting room to get the rhinoceros upper body costumes and change into them when necessary. The stage can rotate between scenes, so some performers will be on the other two sides of the stage to change into the rhinoceros too. On this occasion, the rhinoceros that hit the cat can be easily taken out from backstage. In the last scene, the mass herd of rhinoceros can be projected on the screen that is brought out from the backstage area. The settings on the stage would be simple because putting doors and windows will block some audience's view. The open stage makes the audience feel closer to what's happening on stage. 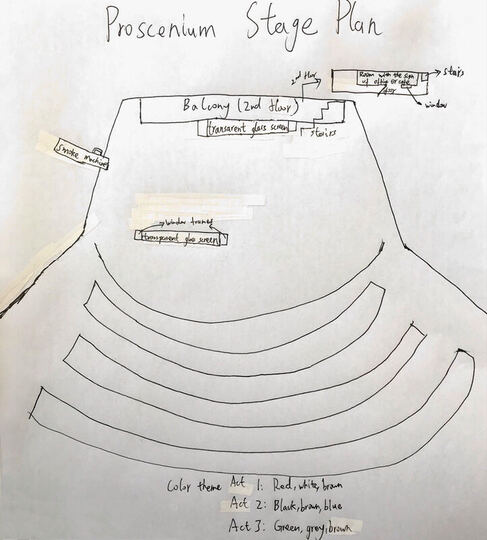 Shown on the right is another staging plan that I pictured. The rhinoceros that runs over the cat enters from stage right and then exits on stage left. The transparent glass screen design is mainly for the last scene, when "Daisy runs to the up-stage window, then to the down-stage window and looks out." (Ionesco 100) The rhinoceros that appear on the front window are illustrated with a video on the transparent glass screen. When the screen is not in use, it is a transparent stage window and will not block the audience's view. This becomes very handy for demonstrating the transition between barbarous and ugly rhinoceros to harmonious and beautiful rhinoceros.
​I also considered arena stage plans and the plans with three floors; however, they might potentially hinder the ways I present the rhinoceros and are possibly impractical in demonstrating the place and movements.